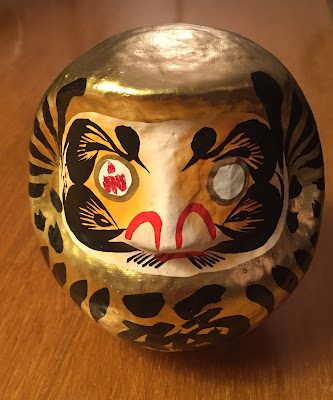 This little guy is apparently a Daruma Doll from www.WeLoveDaruma.com, and it was given to me by my neighbor (and fellow triathlete) Kent to help encourage me with the whole Ironman adventure. I didn't know much about them before, so I'll copy the description that came with it.

Daruma is a guardian of our dreams and aspirations who encourages us to remain determined, and to never give up on our dreams.

Here's how it works: First, think of something special you wish to achieve. Next, draw or paint one of your Daruma doll's blank eyes. This represents the start of your commitment to achieving your goal. Place Daruma someplace visibie so that while he focuses on your objective you'll be reminded to do the same. Once your goal is realized, signify your accomplishment by drawing Daruma's other eye!

The Japanese proverb Nana Korobi Yaoki is closeley associated with the Daruma: if you fall down seven times, get up eight.

If you look closely you can see that I filled in the first eye with a (fairly crude) version of the Ironman logo. Thanks, Kent - great gift! Meanwhile, my daughter is apparently no longer in kindergarten - today we went on a field trip to visit the high school she'll be attending next year. It's very different from the small prep school that Carey and I attended, but I was pretty happy with what we saw. The tour was run by students, all of whom seemed pleasant, and we got a chance to step into a number of classrooms to hear from the teachers about their particular subject. Some of the material was familiar to me, but the very well-equipped shop class had, in addition to a very impressive Delta band saw that looked to be from the 1970s, a new computer-controlled multi-axis router that a student was using to make cutting boards in the shape of North Carolina. In the next room several groups of students were making traditional Windsor chairs with hand tools, so it spans the range of technology.

My daughter could care less about wood shop, but she was very interested in the drafting class that produces 3d-printed models of student designs, some of which were very intricate looking. This was just a first trip to see the place, but I think we both liked what we saw.

Remember training? This is a blog about training. I have actually been doing some, so here's what I've been up to.

I would have run longer, but apparently I've forgotten that in December the days are shorter, so when I left the house around 5pm there wasn't much daylight left. I decided that cutting it a little short was better than being clipped by a car in the dark.

This was predominantly a bunch of short sets, most of them being 100yds, with one set focusing on the pull stroke and the other set on mixing up speeds. I found I was more tired after this than I have been in the past.

This time I remembered that it gets dark early so I managed to start shortly after 4pm and be home while it was still light out. I originally thought about wearing shorts, but common sense prevailed, which turned out to be good as I was cold even in full leggings.