In-app purchases are the work of the devil

I'm going to start with a combination rant and vote of appreciation for my beautiful wife. I was getting dressed this morning when I heard "Ralph: we have a problem!" from downstairs. Thinking that somebody was bleeding profusely, I hustled down to discover that the problem was financial rather than physical. It appeared that somebody had stolen my wife's credit card information and used it to rack up several thousand dollars worth of purchases from iTunes.

While I sat by to do my usual ineffective coaching from the sidelines, Carey placed calls to the credit card company (not open yet) and then to Apple. It turns out that the "hacker" was my 13-year-old daughter, who apparently didn't grasp that clicking on the "purchase more pigs" (or whatever) button in Angry Birds was going to cost actual money. It sounds as though Carey's excellent work has mostly resolved the problem, and we now have the various iDevices locked down to prevent this in the future, but it was quite a hassle. I will admit that I'm going to look in the Map My Ride app to see if there is a purchase triathlon bike button I can "accidentally" press.

Moving on to real training activities

My coach/personal trainer is evidently reading this blog, as I got an email after the last posting. She subtly suggested that it would be good to actually do something beyond just running, and went so far as to list a specific class she was teaching that I could come to. While I was able to dodge that particular suggestion, I have done a better job of getting some variety of workouts done this week.

Wednesday bike ride: 17 miles in just over an hour

Yesterday I went for my first non-solo ride in quite a while, and it worked out well. The weather was very nice and it was good to get out and ride after a two-week break. This was still riding from SAS to parts of Raleigh, so traffic was a hassle, but I'm getting used to the cars and large numbers of stops at intersections. 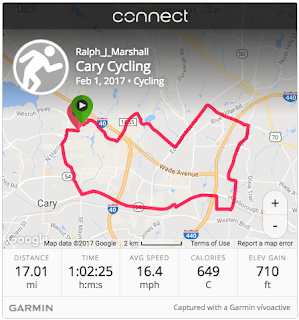 Tuesday I was scheduled to run a slow 8, but training partner KT wanted to go for a shorter run, so we did a hilly loop. I explained ahead of time that it was hilly, but by the end of the run she decided that I was trying to kill her through overexertion. Fortunately, we both survived. 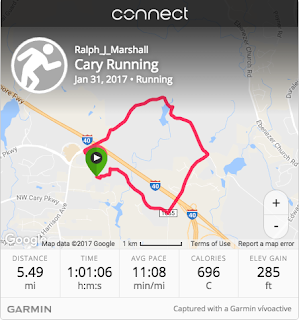 Monday's swim was not quite as tightly scripted as some of our sessions - the "workout" for the day was Just Swim. I did a warm-up set of 100 and planned to do another 2,500 as the main set, but I was driven off-course by my lane partner. Jenn is a much faster swimmer than I am, but when we both hit the wall at the same time I decided to see if I could keep up with her for a bit. I managed to sprint at maximum speed for exactly 1 length and keep up, but had to stop and catch my breath at that point - she seemed unaware that we'd just engaged in epic battle. When I described this later, she refused to take any responsibility for my testosterone-fueled failure to Train Properly.

I did finish up with a 2,200yd set in just over 50 minutes, or 2:20/100yds. This is still a pretty slow pace. I felt as though something clicked towards the end with my form, but I don't see any improvement on the workout details, so we'll have to see if the next outing is any faster.