So, it's been a week of spending money and running ever farther distances, and throughout it all my wife has been a champion supporter. Without any further preamble, allow me to describe the excellent backing she's been providing.

I had planned to conduct another season of triathlon seated on my perfectly good Scattante CFR road bike, which I purchased new back around 2012 after I'd gotten through my first few short triathlons. It's a very nice bike for somebody at my level - it's all carbon so it's light, it's got a plausible set of parts on it, and in short it's not exactly what's holding me back. However...

Last week a very reasonably priced carbon triathlon bike popped up on the in-house bulletin board at SAS, and after giving it a test ride and conversing with my wife about whether or not this was going to be A Bike Too Far she said that the choice was up to me. So, as of Thursday I'm now the proud owner of 4 separate bikes, each occupying a separate niche. It's possible I may have enough of them, at least for now.

It seems to be in excellent shape, although I have to get it dialed in for size; the previous owner was about 3 inches shorter than me and had everything cranked down to the smallest setting. I'm curious to see if the sparse set of spokes is going to hold up under my Sprinter's Physique - I'm not a 120lb mountain climber. So, we have to wait for a report on the first ride, as all I've done is the test ride and then a few laps around the block as I was trying to rough in the correct seat height.

Thanks for agreeing to the purchase, honey!

Today was one of my last really long runs in advance of the March 19th Marathon. I did 20 miles in 3 hours 48 minutes, which is a perfectly respectable 11:25/mile pace - I would have been happy with anything better than 12-minute miles. Once again my wife was a huge help here - she had a serious migraine last night, and wasn't feeling great this morning, but agreed to hang out at home with our daughter while I spent the entire morning off having "fun." Aforementioned daughter and I will be heading out to California Pizza Kitchen to get take-out for dinner, so hopefully that will help repay some small part of the help I've been getting. 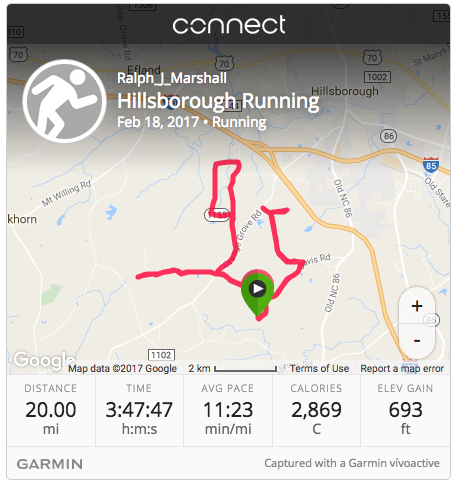 In addition to being my longest run ever, I also managed to set personal records in the categories of Longest Distance Covered Before Swearing Out Loud (14.5 miles), Greatest Distance Before Asking "Why, exactly, are we doing this again?" (18 miles), and Greatest Quantity of Food Consumed During a Run (3x 20oz bottles of Gatorade, 3 packages of Clif Shot Bloks, and a sandwich bag full of pretzels).

When I started on this marathon training, I looked at the days on my training plan that said "Run 20 miles" and figured that it was an obvious typo and should have referred to a bike ride. I'm still not sure how well I'm going to fare in the full distance event, but I can now see myself completing it, which is quite an improvement from where I began. Today I managed to make it to about mile 15 before starting to lose my mojo, but even then I went from running 11:00-ish miles to 12:30ish miles, which isn't terrible given how my legs were feeling.

Fortunately, tomorrow is a rest day.