Longest run before the marathon this week - 20 miles

Today I did my last really long run prior to the marathon, and it turned out to be much like the ill-fated Allied invasion of Germany covered in the book and movie A Bridge Too Far.
So, I won't bore you with the detailed account of the World War II battle, but suffice it to say that the Allies thought they would be able to launch a quick attack over the Rhine, the last major river before Berlin. It almost worked, but ultimately turned out to be just a bit too far and ended in disaster. 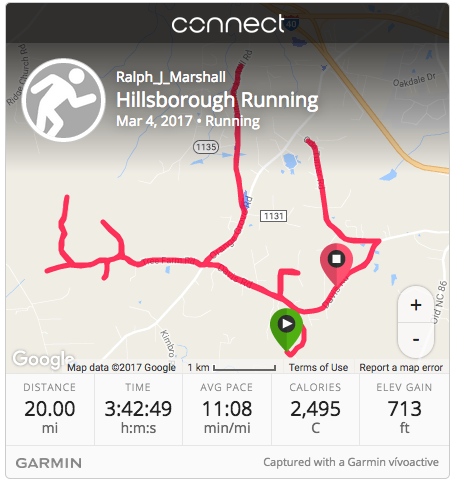 On the surface this looks like a very good outing; I finished the 20 miles that Coach Amanda had set as the original goal, I kept up a pretty good pace over that distance (faster than my 13.1-mile race last year) and I didn't injure myself. However, the observant reader will notice that the green blob indicating where I started is not at the same location as the red blob indicating where I stopped.

Amanda had been following my progress so far and suggested that I might want to try doing 22 miles this week, so I'd set out a course that was 21.5, since that was what fit nicely with the roads around here. However, by about mile 15 (the second time past my house, heading on the last leg) I was starting to have really sore legs and was having a difficult time getting going after each of my rest periods, which were starting to exceed the 1-minute scheduled time.

However, I attempted to plow on and see if I could make the distance, but ultimately it wasn't going to happen. The spot where I finally shut off my watch was at the 20-mile mark, and at the bottom of a pretty good sized hill. I'd pushed myself to run that far, but at that point my legs gave up and I had to walk the rest of the way home quite slowly.

I think that the main problem was that I wasn't keeping my salt levels up. By the time I finished the run my black leggings were covered with white salt patches, and I was on the edge of major cramps. When I finally got home I first had some salt straight out of the bowl, and then a large dill pickle followed by some of the pickle juice. That helped a fair amount, but I'm still not moving too fast. The last time I ran 20 miles I had taken some pretzels with me for the last leg, and today I forgot them; I should have run back home to get some rather than attempting to forge ahead without them.

I am convinced that all of this running is having a major effect on my ability to run shorter distances (which I thought of as pretty long ones just a few months ago). On Tuesday I went out for a loop at the office and clicked off the first four miles at a roughly 9:45/mile pace. It was mostly flat or downhill over that leg, but even when I had to climb back up at the end I managed to keep going fast enough to make a really good time overall.

I am still not nearly as fast as I'd like to be with swimming, but I am seeing some improvement. Back in October of last year I was doing about 2:30/100, which was just painfully slow. I don't know if it's because I've started swimming longer distances, the fact that I've lost a little weight, or simply that with more practice I'm starting to get the hang of some of the technique. Hopefully I'll continue to improve.


The next two weeks

The Tobacco Rd. Marathon is in 15 days, and I'm starting to taper for it a little. I have shorter rides and runs the second half of next week, with a 12-mile outing next Saturday that will hopefully feel like a hop, skip, and a jump at this point. The following week is pretty casual, with the last workout being a 2-mile run on the Friday before the race. Hopefully I'll be going into the race reasonably rested, and we'll continue to have cool weather until after the race.